Our Patroness of Avila Kindergarten 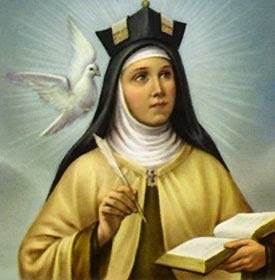 OUR PATRONESS,  ST .TERESA OF AVILA

PRAYER OF  ST.TERESA OF AVILA

Christ has nobody now,

No hands,no feet on earth,

Yours are the eyes

through which he looks

Let nothing disturb you.

Let nothing frighten you.

All things pass away :

Those who have God

find the lack nothing;

The Life of Teresa of Avila

Teresa was born Teresa De Cepeda Y Ahumada near Avila, Spain. Teresa was the third of nine children. Her childhood was happy and ordinary.

When Teresa was 13, her mother died. Her father decided that Teresa would be sent to be educated as at the Augustinian Convent. Almost 2 years into her education at Agustinian Teresa became ill and return to her home in Toledo.

At that time, there were only two life choices for women marriage or religious life. Teresa chose religious life,but her father refused to give permission to become a nun. When she secretly left home to join the local carmelite convent of incarnation, her family finally gave her permission.

Christ Sufferings. At 39 years of age, Teresa discovered the price Christ paid for love and began to want to return that love as best she could.

She began to realise that the environment of the convent of the incarnation kept her from a serious life of prayer. She began to dream of a small poor and ferevent carmelite monastery where the nuns good support one another in their common love of God.

Teresa had always enjoyed people and mini came to her or wrote to her for her advice. On feast days, she played the thambourine so that the nuns could sing and dance. Teresa wrote several books. Her teachings were based on her own life experiences and were rooted in the scriptures especially the gospels.

Celebrate St.Teresa of Avila with children.

Celebrate the feast day of Saint Teresa of Avila with the printable resource for the primary students in your religious education classroom. In this saint Teresa of avila primary activity, children will reflect on Teresa’s  work to establish monasteries and choose 6 people they can pray for.